On August 1, 1943, 177 B-24 bombers take off from an Allied base in Libya, bound for the oil-producing city in Ploiești, Romania> Ploesti was nicknamed “Hitler’s gas station.” The daring raid, known as Operation Tidal Wave, resulted in five men being awarded the Medal of Honor—three of them posthumously—but failed to strike the fatal blow its planners had intended.

This mission was one of the costliest for the USAAF in the European Theater, with 53 aircraft and 660 air crewmen lost. It was proportionally the most costly major Allied air attack of the war, and its date was later referred to as “Black Sunday”. Five Medals of Honor and 56 Distinguished Service Crosses along with numerous other awards went to Operation Tidal Wave crew members.

Romania was a major power in the oil industry at the time. It was one of the largest producers in Europe and Ploiești was a major part of that production. The Ploiești oil refineries provided about 1/3 of all Axis oil production. It was a priority target.

Prelude to the attack-The Germans build up the defenses.

In June 1942, 13 B-24 Liberators attacked Ploiești. Though damage was minimal, Germany responded by putting strong anti-aircraft defenses around Ploiești. Luftwaffe General Alfred Gerstenberg built one of the heaviest and best-integrated air defense networks in Europe.

The operation consisted of 178 bombers with a total of 1,751 aircrew, one of the largest commitments of American heavy bombers and crewmen up to that time. The planes were to fly from airfields near Benghazi, Libya. They were to cross the Mediterranean and the Adriatic Sea, pass near the island of Corfu, cross over the Pindus Mountains in Albania, cross southern Yugoslavia, enter southwestern Romania, and turn east toward Ploiești. The plan was that on reaching Ploiești, they were to locate pre-determined checkpoints, approach their targets from the north, and strike all targets simultaneously.

The Americans formed five groups comprising 178 planes but one plane was lost on takeoff. The formation reached the Adriatic Sea without further incident; however another aircraft was lost in the sea due to unknown causes. Another plane the Desert Lilly — descended from the formation in order to look for survivors. No survivors were seen, and due to the additional weight of fuel, it was unable to regain altitude to rejoin the formation and resume course to Ploiești. 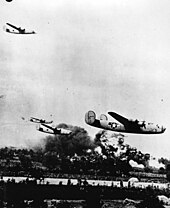 Ten other aircrews returned to friendly airfields after the incident, and the remaining aircraft faced the 9,000 ft climb over the Pindus mountains, which were shrouded in cloud cover. Although all five groups made the climb around 11,000 ft (3,400 m), the 376th and 93rd, using high power settings, pulled ahead the trailing formations, causing the group synchronization to be thrown off.  The strike proceeded without correction, and this proved costly.

Although now well strung out on approach to Pitești, all five groups made the navigational checkpoint 65 miles from Ploiești. At Câmpina, the 389th Bomb Group departed as planned for its separate, synchronized approach to the mission target. It was here however that many planes began making costly navigational errors.

Now facing disaster by being spread out all over Romania, many crews chose to break radio silence and draw attention to their navigational errors.

The Hell’s Wench aircraft flown by experienced veterans Lt. Col. Baker and his co-pilot Maj. John L. Jerstad, was hit by flak. They decided to jettison their bombs and to maintain the lead position of the formation over their target. Realizing the aircraft was no longer controllable, they kept climbing to let their crew abandon the aircraft. None however survived, Baker and Jerstad were posthumously awarded the Medal of Honor for these actions. 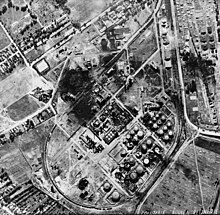 With the 93rd and 376th engaged over the target area, Col. John R. Kane of the 98th Bomb Group and Col. Leon W. Johnson of the 44th Bomb Group made their prescribed turn at Floresti and proceeded to their respective targets at the Astra Romana and Columbia Aquila refineries. Both groups would find German and Romanian defenses on full alert and faced the full effects of now raging oil fires, heavy smoke, secondary explosions, and delayed-fuse bombs dropped by Baker’s 93rd Bomb Group on their earlier run.

Both pilots approached parallel to the Florești-to-Ploiești railway and had the unfortunate distinction of encountering Gerstenberg’s disguised flak train. At tree-top level, around 50 ft (15 m) above the ground, the 98th would find themselves to the left and the 44th on the right. The advantage, however, would rest with the 98th and 44th, whose gunners quickly responded to the threat, disabling the locomotive and killing multiple air defense crews. 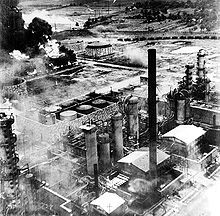 With the effects of the 93rd and 376th’s runs causing difficulties locating and bombing their primary targets, both Kane and Johnson did not deviate from their intended targets, taking heavy losses in the process. Their low approach even enabled gunners to engage in continued ground suppression of air defense crews from directly above their targets. For their leadership and heroism, both were awarded the Medal of Honor.

The last Tidal Wave attack group bombed the Steaua Română refinery (8 miles northwest of Ploiești) at Câmpina. The damage caused by the 376th and 389th attacks heavily damaged the refinery, which did not resume production for the duration of the war. The 389th lost four aircraft over the target area including B-24 Ole Kickapoo flown by 2nd Lt. Lloyd Herbert Hughes. After hits to Ole Kickapoo which was flying only 30 feet over the target area, the detonation of previously dropped bombs had ignited fuel leaking from his B-24. Hughes managed to maintain course for the bomber to drop its payload and the B-24 subsequently crash-landed, in an explosive cart-wheel. Hughes (who posthumously received the Medal of Honor) and five crew members were killed, four survived the crash but died of injuries, and two gunners became prisoners of war.

Only 88 B-24s returned to Libya, of which 55 had battle damage. Losses included 44 to air defenses and additional B-24s that ditched in the Mediterranean or were interned after landing in neutral Turkey. Some were diverted to the RAF airfield on Cyprus. One B-24 with 365 bullet holes in it landed in Libya 14 hours after departing.

For the Americans, it was estimated that the raid had reduced Ploiești’s capacity by 40 percent, the damage was quickly repaired and within months the refineries had outstripped their previous capacity. The region continued to serve as “Hitler’s gas station” until the Soviet Union captured it in August of 1944. 310 airmen died,Five Medals of Honor were awarded, (the most for any single air action in history) 3 of which were awarded posthumously.

Most of the damage was repaired within weeks, after which the net output of fuel was greater than before the raid. Circa September, the Enemy Oil Committee appraisal of Ploiești bomb damage indicated “…no curtailment of overall product output…because many of the refineries had been operating previously below maximum capacity.

The Royal Romanian Air Force carried out 59 sorties during Tidal Wave, and the Luftwaffe 89. The Americans lost 53 Liberators (including 8 which landed in Turkey and were interned) and 55 more were damaged. The Romanians claimed 20 confirmed or probable air victories plus 15 more claimed by Romanian AA guns. Even if optimistic, the Romanian claims compared favorably with the American seven-fold plus exaggerations, during Tidal Wave and subsequent raids.

Given the large and unbalanced loss of aircraft and the limited damage to the targets, Operation Tidal Wave is considered a strategic failure of the American side.

Growing up I was a huge fan of Season 2 Episode 1 of the Twilight Zone titled King Nine Will Not Return.

Operation Tidal Wave began ominously, with an overloaded bomber crashing shortly after takeoff and another plunging into the Adriatic Sea. 167 of the original 177 bombers made it to Ploiești, whose oil fields and refineries provided the Germans with over 8.5 million tons of oil per year. Whereas most Allied bombing in World War II was carried out from a high altitude, the bombers that raided Ploiești flew exceptionally low in order to evade the Germans’ radar. The bombers lost the element of surprise, however, when one group veered off on the wrong direction, forcing the others to break radio silence in order to direct them back on course. This unplanned adjustment also led to the bombers approaching from the south, where the Nazis had concentrated their anti-aircraft batteries.

Robert Cummings portrayed a pilot haunted by the plane of which he was the pilot of before the raid, but who was replaced before takeoff and subsequently plagued by survivor guilt. If you haven’t seen it get it. It is not a classic war movie but shows some of the mental anguish suffered by survivors.

The bomber aircraft used in this episode was a North American Aviation B-25C-which still exists in storage with Aero Trader in Borrego Springs, California near where I grew up.

The ensuing attack was dramatic, chaotic and costly. The Allies suffered heavy casualties, and smoke from the explosions caused by the first wave of bombers made visibility difficult for subsequent waves. Survivors reported debris like branches and barbed wire hitting and even ending up on the inside of their planes. Lt. Col. Addison Baker and Maj. John Jerstad were awarded the Medal of Honor for their (unsuccessful) attempt to fly higher and allow the crew to bail of our their badly damaged plane. Another pilot, Lt. Lloyd Herbert Hughes, also received a posthumous Medal of Honor for flying his critically-damaged B-24 into its target. Col. John Kane and Col. Leon Johnson, who each led bombing groups that reached their targets, were the only men who were awarded the Medal of Honor and survived the raid.

Although the Allies estimated that the raid had reduced Ploiești’s capacity by 40 percent, the damage was quickly repaired and within months the refineries had outstripped their previous capacity. The region continued to serve as “Hitler’s gas station” until the Soviet Union captured it in August of 1944. 310 airmen died, 108 were captured and another 78 were interned in neighboring Turkey. 88 of the original 177 B-24s returned, most of them seriously damaged. Despite setting the record for most Medals of Honor awarded to airmen in a single mission, Operation Tidal wave was never repeated—the Allies never again attempted a low-altitude assault against German air defenses.

A New View of Winston Churchill